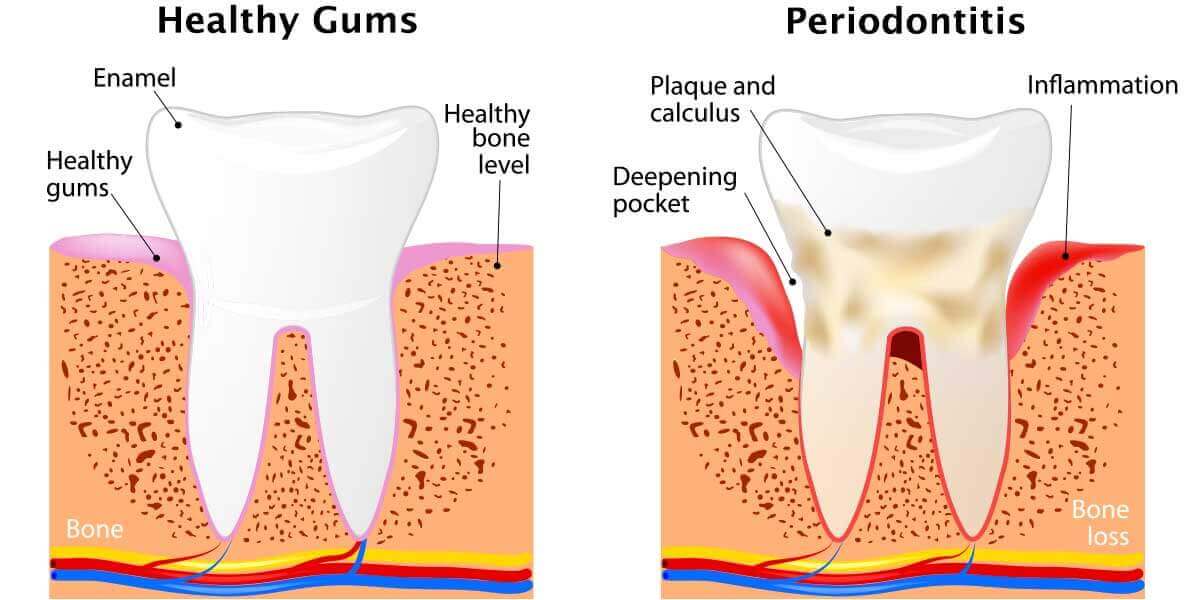 Gum disease, also known as gingivitis or periodontal disease, is an infection that occurs in the gums, deep tissues, and bones that support your teeth. (The word “periodontal” means “around the tooth.”) Unless the disease is treated, it can ultimately lead to tooth loss. In fact, the American Academy of Periodontology lists gum disease as the primary cause of tooth loss in adults age 35 and over.

Your mouth naturally produces a sticky substance called plaque. Without adequate brushing and flossing, plaque builds up on your teeth. The bacteria in plaque produce poisons, or toxins, that irritate the gums, and cause infection. As the infection increases in severity, it breaks down the bones and tissues that hold your teeth in place.

Gingivitis: The initial stage of gum disease, known as gingivitis, is the mildest form of gum disease. During this stage, the gums become swollen and red, and may bleed with brushing or flossing.

Gingivitis is frequently painless, and as a result, many people suffering from it don’t seek advice or treatment. But with professional treatment and daily attention to oral hygiene, gingivitis can be reversed before it progresses.

Periodontitis: Untreated gingivitis may develop into periodontitis, the more extreme form of gum disease. In this stage, the infected gums begin to separate from the teeth. The newly created spaces between the gums and the teeth are called pockets.

As the disease progresses, these pockets grow larger, which can lead to greater damage to deep tissues as well as bone. When enough tissue and bone are affected, the teeth loosen and may fall out or need to be removed. 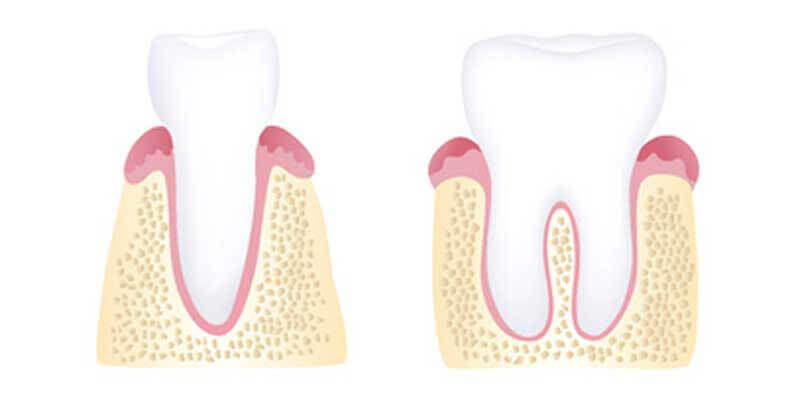 Firm, pink, gums attached to the teeth and supported by firm dense bone are the indicators of healthy gums and teeth that have the strong support they need. 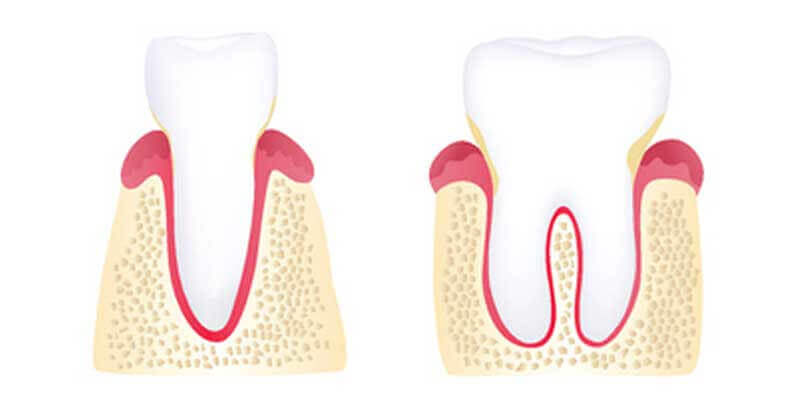 A build-up of bacteria causes Gingivitis. In its early stages, inflammation around the gums is observable, with gum tissues appearing red and swollen. Gums that are easily irritated or that bleed during tooth brushing indicate the presence of Gingivitis. Removal of the plaque buildup is necessary to prevent the development of gum disease. 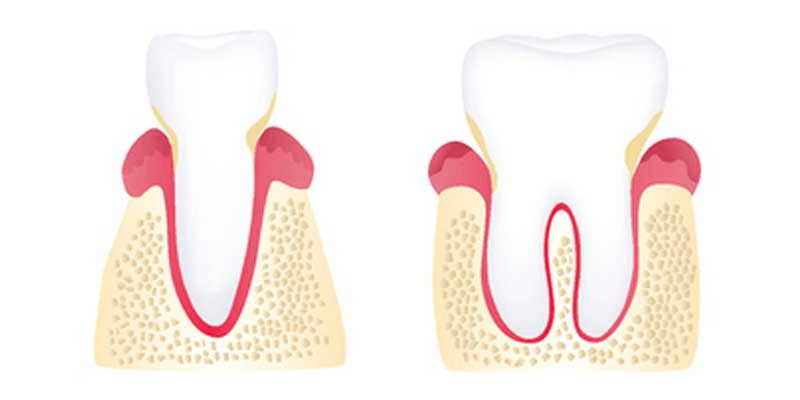 As the gums become more inflamed, they start to pull away from the teeth, forming spaces known as periodontal "pockets." Food, bacteria, and plaque begin to collect in the pockets, leading to infection. The surrounding bone becomes damaged both by bacterial toxins and by the immune system's response to infection. 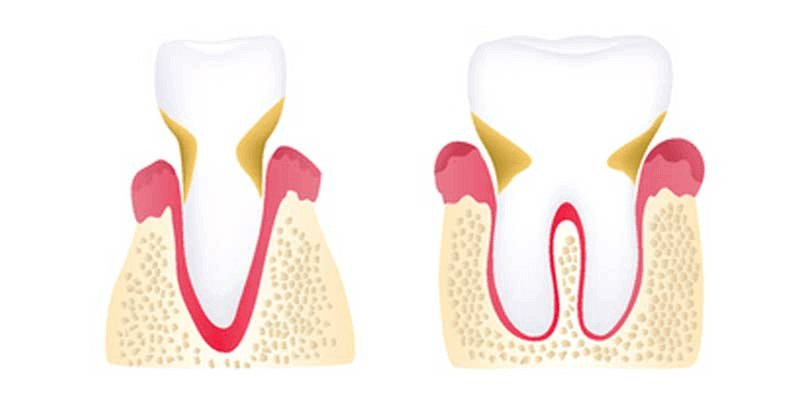 The symptoms of periodontitis become more severe as inflammation spreads, and some discomfort may occur. More supporting bone is lost, teeth loosen, and the gums recede further. 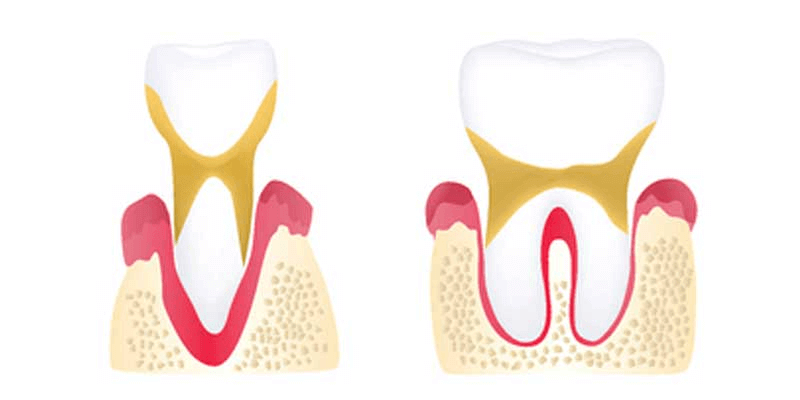 A major cause of tooth loss in adults, advanced periodontitis is marked by painful abscesses that are the result of the infection spreading beneath the gums.

The good news about gum disease is the simplicity of preventive care for most people. The best way to avoid gum disease is to follow the same measures you take to avoid cavities: brush your teeth with fluoride toothpaste twice daily, floss every day, maintain a healthy diet, avoid tobacco use, and have your teeth professionally cleaned on a regular schedule.

Your dentist may recommend twice-a-year or more frequent checkups, depending on the state of your oral health. Even with daily home care, plaque can build up and harden into a tough substance called tartar. In this state, only a dental professional can remove it. In the early stage of gingivitis, it's possible to reverse or even eliminate the disease by increasing the level of oral care. But it's important to catch the disease as early as possible.

Regular dental checkups are vital, as is an awareness of the warning signs of gum disease. If gingivitis progresses to periodontitis, serious problems including tooth loss can occur.

The following are risk factors that you may be able to control to reduce your chance of developing gingivitis or progressing to periodontitis.

Back to Patient Info
HOME